Last night I was overwhelmed, this morning I cried in the shower, then I wrote these words.

We need a New Story

Today I am shocked by the cataclysmic change that has occurred during my sleep as I wake in Los Angeles.

I see a country who outside of London is not happy with the way things were.

I see fear from my middle class friends who seemed, like me, quite unaware of those millions that felt differently in different generations and geographies around the country.

And in this narrative vacuum that our decision has created

I can see an opportunity.

An opportunity for a government that will engage those who voted for an unknown adventure.

An opportunity, with a blank canvas to reconsider our global position and relationships.

An opportunity to spring two steps forwards from what may seem like one big rock back.

A space has been created

It will either be filled with isolation, division and hostility

A new way of relating to the countries of the world,

A new way of inspiring our common wealth & wisdom

A new way of using our tools to create connection

We need mutual deal makers and lots of them

There is plenty of work to be done

We cannot let the rock back be our generations legacy

We must imagine a new story

This is a basic ‘How To’ hold your own Solvey Jam! Email hello@solvey.com if you want help! 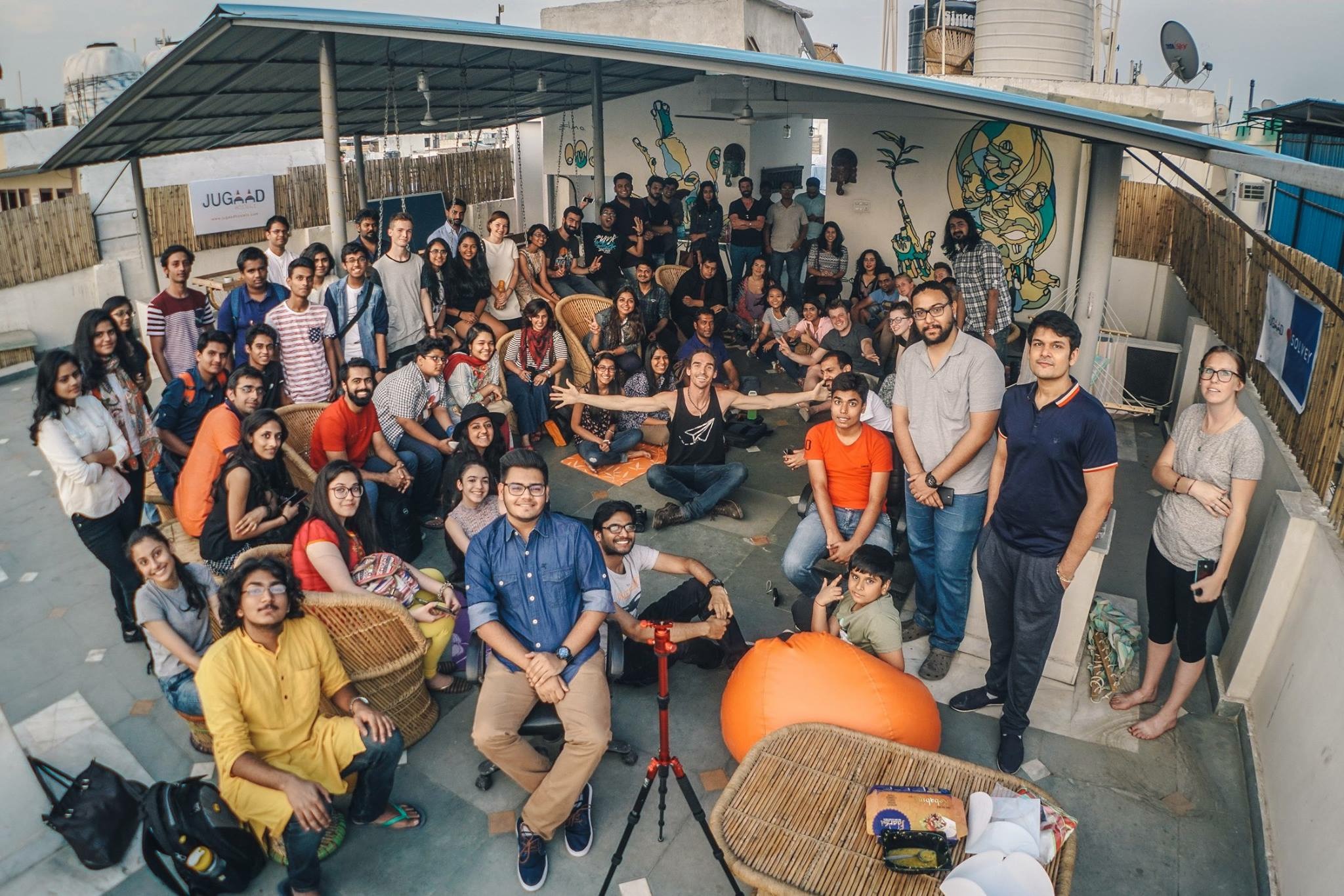 Now we have done 5 jams we are bringing together what we feel are the optimum ingredients. This was New Delhi, an amazing time but possibly a little large at 80 people which made it 3-4 hours long! So here are some ideas about how to run it right! 🙂

Some Questions we have found helpful…

What is the one thing you would change here to help this place flourish more fully?

What things have you seen and experienced that you think need changing here?

Have you looked at the numbers? http://socialprogressimperative.org?

What ideas or projects have you seen make real change in peoples lives here?

What do you care deeply about seeing change in the lives of those around you?

If time, money and support were unlimited what would you love to imagine could be different here?

What could we do today that could move these ideas one step forwards?

This is one of many emails I have received recently preceding the opening of the solvey application window… Check Raymond out he is amazing 🙂 I hope he submits a video along with a bunch of others!

My name is Raymond and I am 13 years old and from Australia. Seeing your videos when you were in Africa, made me design a generator that can supply an infinite supply of electricity to a,small village. I am currently building a prototype (working) it is 40X40X28cm and need help. I need a engineer and a electrician to inspect my work and advise me of failures in the product. I don’t like asking but, may I have $1500 so I can buy more copper wires and and supper earth magnets. Super earth magnets are not cheap and cost about $16 a pop, I need to fill a rotor with a diameter of 36cm full. I have not patent the design yet but don’t know how to, please may you help me I don’t was to start a business or make money but make the world a better place. I love inventing things but don’t want to be an inventor the rest of my life. Could you please help me lift this revelutionary idea off my shoulders so I don’t have to worry about it anymore and continue to pursue my dream to become a Lego designer. 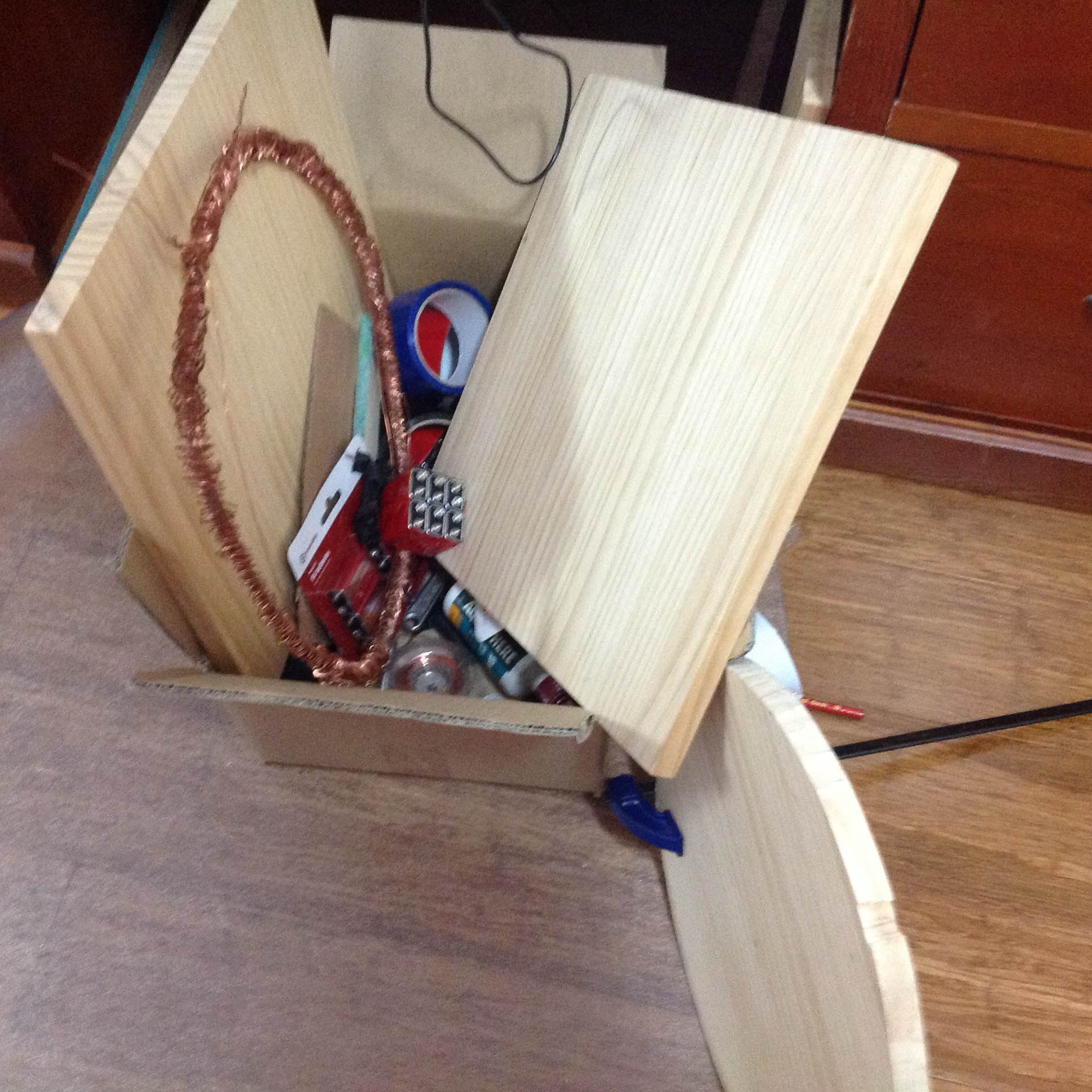 The duo, who have a reach of over 1 million viewers in 200 countries, are seeking video applications via their youtube channels from fresh talent from any country in the world with any idea that could help to encourage human flourishing, measured by the Social Progress Index and framed by the UN Global Goals initiative.

They fly to Ethiopia Friday 1st April to begin the first of their ‘Idea Jam Sessions’ to encourage and help develop the ideas of those who attend, before continuing to fly east round the world in 30 days to raise awareness of the project in 7 more global territories. The global tour completes in Iceland on April 28th where they will be joined by Iceland’s Prime Minister, who will press the ‘Publish’ button on Louis’ youtube channel to upload the video announcing that the application window is officially open.  Eventually closing 2 weeks later on 3pm GMT May 15th.

David Erasmus said: “We have all seen the reality shows pitching business ideas and performing pop artists but we wanted to create a show via youtube that was community based, global and worth doing, so we are looking for small voices with big ideas, compassionate problem solvers who want to change the world. We want our kids to aspire to be brave, creative leaders not be limited to being just another pop artist or money maker.”

Louis Cole said: “I have spent the last three years daily filming my life, making over 1000 videos and sharing them with people in 200 countries, I have always been passionate about following my dreams and ‘living the adventure’.  Joining with Dave to do Solvey is an exciting opportunity to connect with my youtube community in a new deeper way that really could help make a difference in the world!”

The pair will select 7 winning ideas to put in the ‘Solvey Spotlight’, where the ideas will all receive a combination of intellectual, financial and social capital to help get the ideas to the next stage in their evolution.

Dave Erasmus Said : “We decided on 7 teams because there are 7 continents, 7 billion people and 7 is a number small enough we can dutifully care about and big enough to build a real fellowship.”

In 2015 Cole and Erasmus ran a successful pilot which received applications from 20 countries http://www.huffingtonpost.com/david-erasmus/the-solvey-project_b_7608236.html and Awarded One Wave (http://onewaveisallittakes.com/), an Australian team helping make a dent in our global mental health problem through taking people surfing, funds, social exposure and mentorship as well as a trip to LA to receive global exposure on stage at Vidcon, the iconic youtube convention.

David Erasmus is a serial social entrepreneur will 3 tech and marketing company exits, selling his first online marketing company at 21 and recently passing CEOship of givey.com,  which he founded, to Neil Mehta. He is an experienced public speaker with talks for Google, UCL, Oxford University, and 4 different TEDx Talks.  He has a youtube channel where he shares his learnings and experiments http://youtube.com/daveerasmus And blogs at daveerasmus.com and on the Huffington Post http://www.huffingtonpost.co.uk/david-erasmus/

Louis Cole is a video maker and world traveller, with 4.5 million followers across his social platforms. He has made over 1000 daily videos on youtube  viewed over 200 million times.  http://youtube.com/funforlouis. He is the founder of ‘livetheadventurestore.com’ and is currently working on plans to build a treehouse eco village.

And then AlphaGo smashed up Lee Sedol 4-1 at Go and all of Asia watched.

The modern history of machine intelligence has been marked by moments of ‘victory’ by machines over biology. With Deep Blue taking down Kasparov at chess in 1997. Watson Winning at Jeopardy in 2011 and now AlphaGo birthed by DeepMind taking down Lee Sedol in 2016 – A feat until recently predicted only to happen in 10 years time.

The thing I enjoy about the WIRED article is the focus on the beauty of both competitors, the Alpha’s ability to learn the game in a way no human has, using reinforcement learning to play itself and learn through a different pedagogy. As well as celebrating Sedol’s transcendent moments of biological brilliance helping him to his solitary win.

However I feel there are two bigger themes being propagated, implicit in the analogies we are creating to show the world how machines are developing

Almost all the terrible moments in history come from the elites ability to divide the people,  and we unfortunately can see some of these methods being used today in US politics

Tim Wise does a good job of increasing our consciousness of this that is deeply embedded in our history.

But what I am concerned about is that, as we continue to venture into one of the most important evolutionary moments in all of existence that we will carry on these childish themes of control and competition that have abused and pillaged our global communities and the result would be more damaging than anything previously encountered.

I am concerned that if we don’t also create ‘moments’ on the journey to mixed-matter intelligence that speak to the values of the future that we so desperately need, that we will fall foul to the ideas that trapped our grandparents in cycles of hate and fear.

It is not enough for the writers to comment on the beauty within the competitive frame of the game that has winners and losers. Don’t get me wrong, I love games and sports and it’s a great way to create clear goals and push each other to develop but we also need respectful signals that help us to imagine an interdependent, collaborative future where we can create more and differently with MM Intelligence than ever before.

Me performing some bluesy type music in partnership with a machine! Not in competition but hopefully Bleu will grow to a place of making music in ways that I could, nor any human could have ever imagined.

As I explained the idea, my friend Alan told me there is a field call ‘Computational Creativity’

I found David Cope former professor at Santa Cruz california in music, I emailed, he responded….

I suggested the following.. 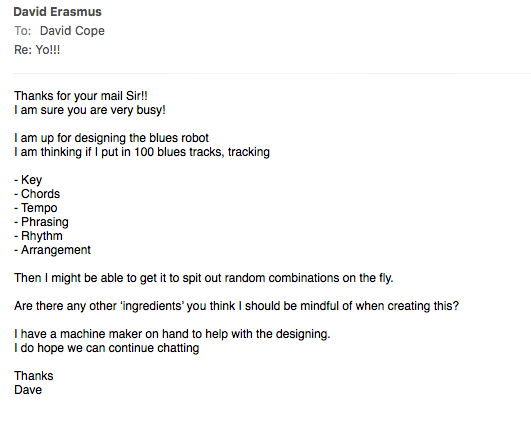 So this is my task (should I choose to accept it)

Then I Bleu and me ever did perform and bleu got to a self governing, self developing state and you enjoyed it you would be appreciating a mixed-matter intelligence music performance.

In summary, I would LOVE to see some press releases about machines and biology working together to create unprecedented results! not just one beating another!

Watch out for Bleu 🙂